John Kerry and Howard Schultz at Seeds and Chips 2018. Take part with Dotmug. 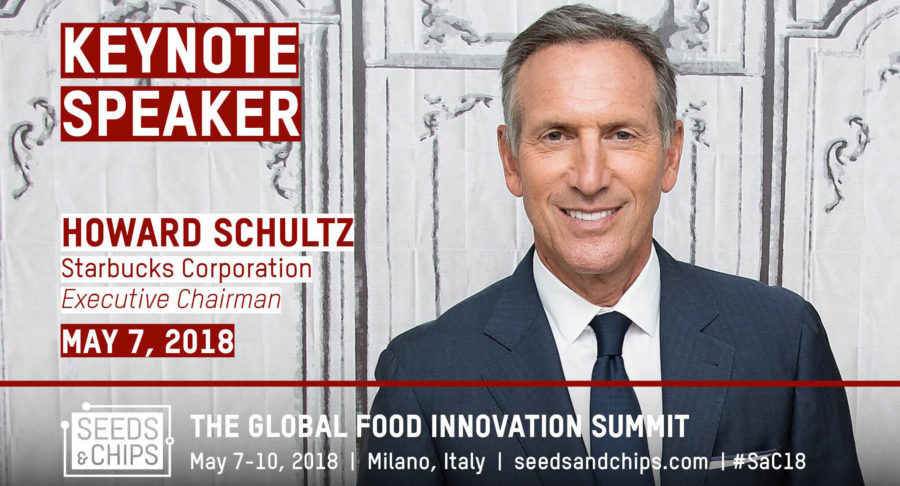 The 2018 edition of Seeds and Chips, the major event celebrating innovation in the food sector, is taking place May 7-10 at MiCo Milano Congressi. It is the most important event on a global scale in the food innovation sector. And among the many esteemed presenters, there will also be two international keynote speakers. Dotmug is the Media Partner of Seeds and Chips 2018, and we’re giving our readers a 20% discount on the ticket price. Just subscribe to our newsletter to get all the latest updates.

Few people know that the career of Howard Schultz, founder of the largest international coffee shop chain in the world, had a turning point during a work trip to Milan in the 1980s. The cafes and bars dotting every corner of the city were what inspired the revolutionary concept of Starbucks – a combination of coffee experience and meeting place. 30 years have passed since that first trip, and meanwhile Starbucks has transformed into an unparalleled success story. The business is worth 77 billion dollars, with over 21,000 stores all over the world.

Howard Schultz, now the company’s executive chairman, returns to Milan on May 7th, to open the first day of the 4th annual Global Food Innovation Summit.

Last year, Barack Obama chose Seeds and Chips 2017 as the forum for his first post-presidency speech. The topics centered on young people and innovation – two areas close to Obama’s heart – united to face the challenges of nutrition, which are inextricably linked to climate change. “Climate change will continue to have an impact on our world; producing energy will become more and more difficult, and so will producing food,” the former president of the United States affirmed. It was a call to action which also moved John Kerry, who had been named Secretary of State under the Obama administration. For Kerry, finding solutions to environmental issues has been a central theme to his political career. His foundation Our Oceans, with over 9 billion dollars of investment, works to protect the world’s oceans.

John Kerry will appear on May 8th with a speech on the importance of climate change in the food system, and the challenges we face in trying to ensure a sustainable future. This year’s Global Food Innovation Summit represents for the ex US Secretary the central role of food in the relationship between sustainability and the future – a topic he touched on back during the 2015 Expo.