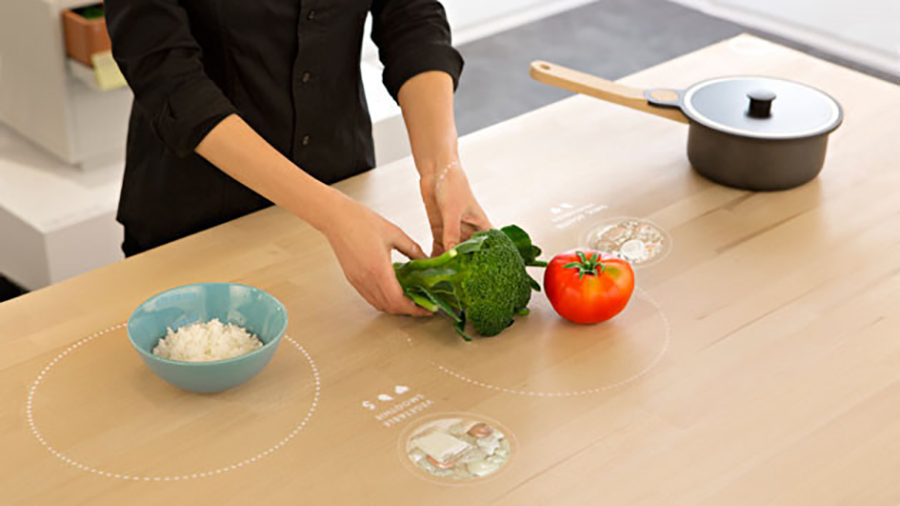 18.000 m2 for an 8 stories building, after an investment of €80 million in June 2014 IKEA Altona, the first IKEA city store, opened in Hamburg IKEA Altona ad Amburgo.

“Ideas about how technology, space restrictions and eating habits in the future will affect our kitchen routines are presented in an interactive installation. “This concept kitchen is not really about solutions – it’s about how we’ll behave in 2025,”.

The new Ikea space in Milan springs from a fusion of concept food, sustainability and technology; it isn’t just a temporary store but aslo a creative lab in the heart of Milan design district.Once home to the show room of the fashion brand “Palazzo Sempione”, the old building of Via Vigevano 18, on the Navigli, has now been transformed into a multifunctional space, creative heart of Fuorisalone 2015. The place is dedicated to food culture, to its ability to promote connection and sharing and also to its undeniable relation with technology, to the Iternet of Things and its endless possibilities above all.

For the first time Ikea brings its goods to the city center, in a 1400 m2 building. A few days away from Expo 2015, during the annual design exibition Salone del Mobile, the Swedish company confirms its involvement in both food and innovation businesses. The feeling at first is that of entering an experimental lab, but at the same time the large space surrounding the yard, where a caffee selling Swedish specialties is located, gives a homey feeling to the visitor. The homey feeling is reinforced by the clothes hanging above our heads, welcoming us into what could easily be our own house, by the benches and wooden “city gardens” branded with the hashtag #IKEAtemporary, onto which green flags with the Ikea logo flap. In fact, green prevails, as a sign of respect for the environment and sustainability, that is more and more embracing what we could call food experience as well as furniture. “Because we are curious, about food. Are you?” is the message that welcomes us and dominates the advertisement campaign of the company (from posters at bus stops to writings in the street, for an action of guerrilla marketing). The Scandinavian company is investing on curiosity, experiments and the intention of becoming a benchmark in the food realm.

We will cover the different spaces in other articles, but for the moment we would like to focus on the object that captured our attention and made us stay and watch, interact, share.

The kitchen in 2025: interactive tables

IDEO, a London incubator of innovation and design, along with 50 univeristy students (from Ingvar Kamprad Design Centre of Lund University and from the University of Technology of Eindhoven) explored a new idea of how food will be experienced 10 years from now and presented their own idea. Recycling will be integrated into the kitchen furniture and there will be more consideration for food as a means of relation but also of environmental consciousness.

We were fasctinated by the interactive table at the center of a room, where people were moving around ingredients and then stopped to watch them: they were exploring different combination of ingredients, guided by the table. The counter was in fact suggesting combination and recipes and even helping measure the ingredients. Possibly beacause at Dotfarm we are developing a mobile food product which focuses on food knowledge, we not only see in this interactive table endless informative possibilities, but also a strong need to explore food and ingredients.

Giorgia Nervi, who is responsible for the Ikea project explains it this way: “Housing spaces will become increasingly smaller and the whole living space will have to be reconsidered. The kitchen, particularly, might find its new core in the table and not at the stove anymore.”

Indeed an induction cooker along with cameras and projectors on the ceiling that can recognize ingredients and suggest recipes, make the table the true heart of the kitchen. An object that represents close bonds and communication, especially for the Italians, could now become a technology thanks to which we can discover, experiment and share our food knowledge.