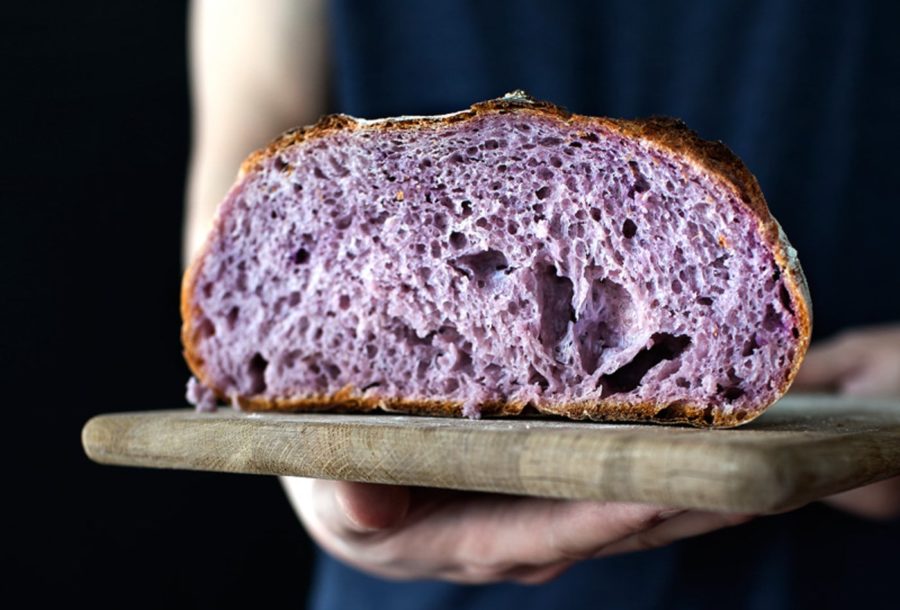 The scent of bread fresh from the oven is one of the 7wonders of the world, even if no one wants to admit it. And yet those lovely loaves and buns are some of the first things to be (often wrongly) cut from our diets. This is because white bread is associated with a higher risk of heart disease and obesity compared to whole grains. But an ingenious new solution has arrived from Singapore: it’s not white or whole wheat, it’s a new superfood called purple bread. Tasty, healthy, rich in antioxidants and unique to look at, it’s a great way to wow your friends at the dinner table!

The secret to its color? Anthocyanins from black rice

Purple Bread is one of the latest gastronomic discoveries. The idea came from Southeast Asia at the National University of Singapore, where food scientist Dr. Zhou Weibiao created this unique new baked good.

Purple bread owes its color and other characteristics to high amounts of anthocyanins, a type of water-soluble flavonoid extracted from black rice. These pigments are added to the dough through a special process in the lab. They are rich in antioxidants and have anti-inflammatory properties. The resulting bread appears to be 20 times more digestible than traditional white bread, and 80% of the antioxidants and anthocyanins remain intact even at 200°C/390°F.

The flavor and soft texture are identical to white bread, but so is the calorie content. That’s because the difference this product offers isn’t the amount of wheat flour or starch, it’s the lower glycemic index. The bread has enough benefits that it’s being touted as “the world’s first baked superfood.”

Antioxidants, anti-inflammatories, perfect for people suffering from obesity or diabetes

Purple bread is an excellent source of natural antioxidants and anti-inflammatories, which help prevent neurodegenerative and cardiovascular diseases. It’s also a great weapon for people dealing with obesity and diabetes, and it also seems to help protect against cancer. Its secret is anthocyanins, which create a chemical reaction during baking, and slow digestion down by 20% compared to white bread.

In this way, it also slows down the process in which our bodies transform starchy foods into sugar, which can be especially harmful for diabetics. The main advantage of purple bread is that it greatly reduces blood sugar levels, and as a result also reduces feelings of hunger. This is why the new superfood is highly recommended as an addition to your diet.

The sort of color therapy purple bread provides can also be achieved with other similarly hued foods. For example, blueberries, red cabbage, plums, eggplants and beetroot are all considered superfoods due to their color, and so are the famous Goji berries. The merits of these foods all come from their high levels of anthocyanins.

DIY Superfood: here’s how to make your own purple bread

If you want to make a superfood in your own kitchen, there are a few basic rules. For purple bread, the most important is the short cooking time. Don’t forget that even if anthocyanins lose some of their beneficial properties at high temperatures, this type of bread manages to maintain most of them because it’s only in the oven for a short time — Just 8 minutes at 200°C/390°F.

The real challenge is extracting the pigment from black rice. Can you substitute it? Yes – with red cabbage! The typical properties of this superfood are also present in cabbage, and you can use its color helps you create your own purple bread. You just need to reduce the amount of water used in normal homemade bread dough when you add the red cabbage extract.

And actually, using local products available to you could be a better move anyway. Superfoods are becoming more than just a craze, they’re almost an obsession. The consumption of foods like avocados, chia seeds, goji berries and quinoa has grown at a disproportionate rate in recent years, greatly outpacing production. The demand for ginger has seen a 670% increase between 2010 and 2016, while demand for quinoa is up 380% and turmeric is up by 220% (Coop Report 2016). This is unsustainable and contributing to problems like deforestation, intensive exploitation and agricultural land grabbing on a global scale. It’s worth considering whether exotic superfoods are actually something special, or if they’re just a super profitable trend.